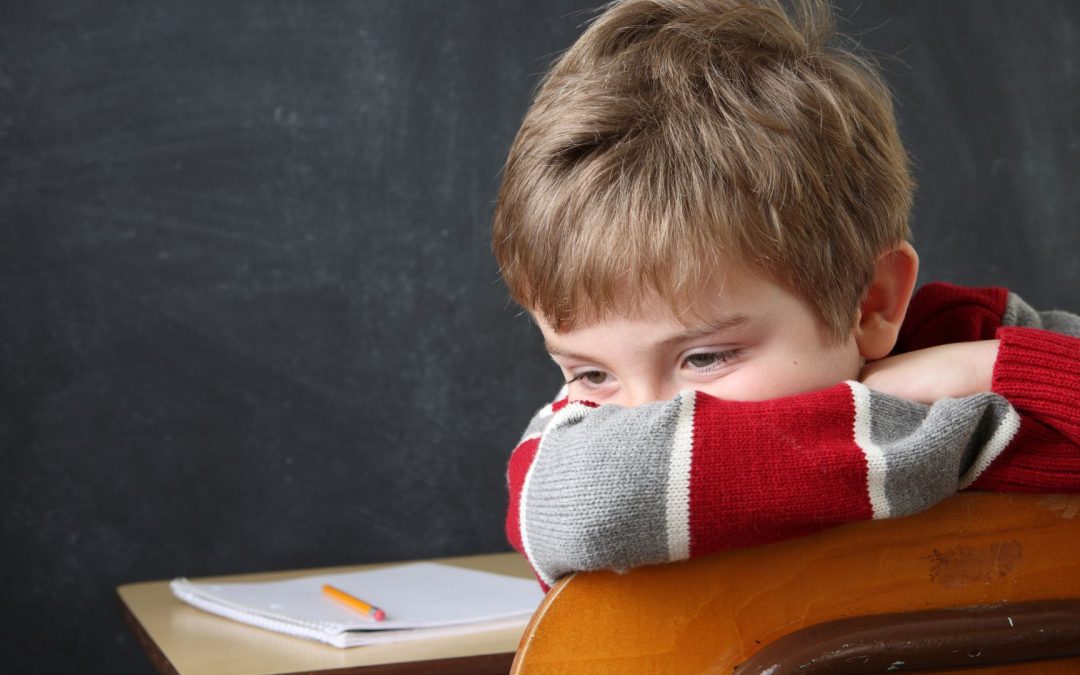 Can diet cure or cause ADHD? This is a question I am often asked as a dietitian. This blog aims to highlight some of the dietary interventions frequently mentioned, examine the evidence, and consider those which might have some benefit. Families also struggle with medication side effects and their impact on eating. Many different diets have been trialled for ADHD. Families naturally want to explore everything possible to alleviate symptoms, as ADHD impacts on daily life for the entire family.

ADHD is a mental health diagnosis recognised in the Diagnostic and Statistical Manual of Mental Health Disorders (DSM5) There are 3 subtypes;

People with ADHD typically have difficulty concentrating on tasks or sitting still for long periods. Adults and children are affected; ADHD can have a significant effect on school, work and social life. Diagnosis is generally during childhood, and requires symptoms to have started before 12 years of age. Sometimes early behaviours are missed and diagnosis occurs in adulthood.

Globally around 5% of the child population are diagnosed. ADHD is more common in boys than girls with a ratio of 2-5 to 1. Most cases are diagnosed between the ages of 3-7 years. The cause is unknown, but it does run in families. Premature birth, low birthweight, epilepsy and brain injury at birth or later make you more susceptible to developing ADHD.

Are there any dietary recommendations for ADHD ?

First line advice is a balanced healthy diet, following the ‘Eatwell Guide’. Eliminating food groups is not recommended as per the National Institute of Care and Excellence (NICE) Guidance NG87. However, if a particular food or additive is suspected to w 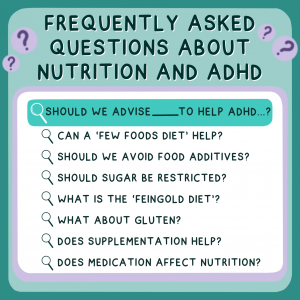 orsen symptoms then a dietitian can assist with identification and elimination. The first step is to keep a ‘food and behaviour’ diary over a period of several weeks.

Is there any evidence that diet exacerbates ADHD ?

Diet is mentioned as a ‘trigger’ and potential ‘cure’. However, good quality evidence for dietary intervention is lacking. Anecdotally, in some children a change in diet can improve behaviours and it is a ‘hot topic’ within support groups.

In the 1970’s the ‘Feingold Diet’ was a popular treatment. Originally developed  by Dr Benjamin Feingold for children with allergies; he also noticed improvements in behaviour as an additional benefit.

The Feingold diet is very restrictive and may lead to nutrient deficiencies and poor growth. Lack of enjoyment of food and feelings of guilt when ‘banned’ foods are eaten are also possible. Feingold recommends always cooking from scratch, perhaps difficult for a busy family.

Anecdotally there is evidence of success with the diet, but studies do not support this. Behaviours in a small number of children might improve by avoiding certain additives but that does not require the full restriction of the Feingold diet.

Should we avoid food additives?

There is limited evidence that specific food additives are linked to ADHD symptoms.

If a food and behaviour diary identifies links with additives such as colourants and preservatives then, under the care of a dietitian these could be removed from the diet. Removing these will have little effect on the nutritional quality of the diet as foods containing these are commonly nutrient dense and are high in sugar. These foods include sweetened fizzy drinks and confectionery, particularly sweets. If growth is a concern then close monitoring is necessary.

The additives most often cited are:

Food manufacturers are increasingly finding alternatives as much as possible. If these additives are present in food or drinks then the label must carry a warning, as per advice from the Foods Standards Agency:

‘May have an adverse effect on activity and attention in children’

The few foods diet is based around eating lamb, potatoes, carrots, tapioca, peas and pears. It is very restrictive, evidence is limited and dietary deficiencies are likely. If trialled it must be done under supervision. Foods are reintroduced singly, the most common foods found to exacerbate behaviours are wheat and diary. 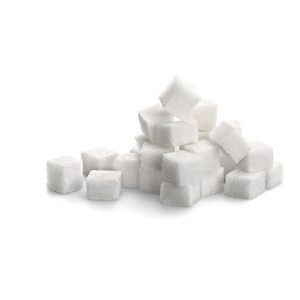 Should Sugar be Restricted ?

Keeping an eye on sugar intake is beneficial for general health. Replacing high sugar foods with more nutrient dense foods improves overall diet quality. Closely monitor growth in children if sugar is being restricted. There is no good evidence that sugar is linked to behaviour in children. Sugar is often consumed in quantity at parties where excitable behaviour is more likely and therefore a link made.

There is no good evidence to suggest a gluten free diet is beneficial. Avoiding gluten can be particularly problematic in those children who already have a restricted diet, such as those with concurrent Autism Spectrum Disorder (ASD). If gluten is avoided, then suitable alternatives with comparable energy should be recommended.

There is limited data from observational studies of a link between low levels and ADHD symptoms. Blood tests to check levels and supplementation if needed can be useful. This is particularly important if the diet appears to be low in iron rich foods. However, blood tests in this patient group can be tricky due to anxiety and ASD. Deficiencies identified should be treated with supplementation under guidance of a GP or Consultant.

The rationale for considering this is essential fatty acids are contained in the phospholipids of nerve cell membranes.

Some studies have shown benefits of omega-3 supplementation, although NICE does not recognise this. Combined doses of eicosapentaenoic acid (EPA), Docosahexaenoic acid (DHA) and gamma-linoleic acid (GLA) taken for at least 3 months might be useful. More research is needed to confirm dosage and benefit. Use in addition to conventional therapy and not a ‘stand alone’ treatment. A good tip is to try to ensure 2 portions of oily fish are eaten weekly (if possible, try to choose from sustainable sources). Other sources of omega 3 include walnuts, chia seeds, rapeseed oil, ground flax seeds and omega 3 enriched foods such as certain brands of eggs, milk, yoghurt, bread, and spreads (check the label).

Common medications prescribed are Methylphenidate and dexamphetamine. These work by increasing dopamine and norepinephrinelevels in the brain. Dopamine is a neurotransmitter and linked to rewarding behaviours. Both medications are stimulants and increase activity in parts of the brain that control behaviour and concentration. This decreases hyperactive and impulsive behaviours. Instant and slow release formats are available. Medication is not considered a ‘lifelong treatment’ but needs regular reviews by the prescriber.

Side effects often directly impact appetite and cause stomach pains and nausea. The effect can require nutritional supplements in some cases. Slower growth has also been noted in some children; it is unclear if this is due to the medication or decreased appetite. Children on medication need regular monitoring of growth and height.

Points to consider if medication is interfering with appetite: 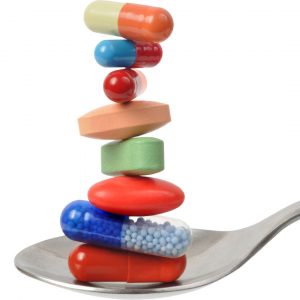 Whilst there is limited evidence for dietary treatments for ADHD consideration should be given to some, whilst others have risks to nutritional sufficiency and should be avoided. Medication can impact on appetite and changes to eating patterns might be needed, alongside regular monitoring

The effect of sugar on behaviour or cognition in children. A meta-analysis (1995). Wolraich et al.