Understanding weight stigma and how to combat it 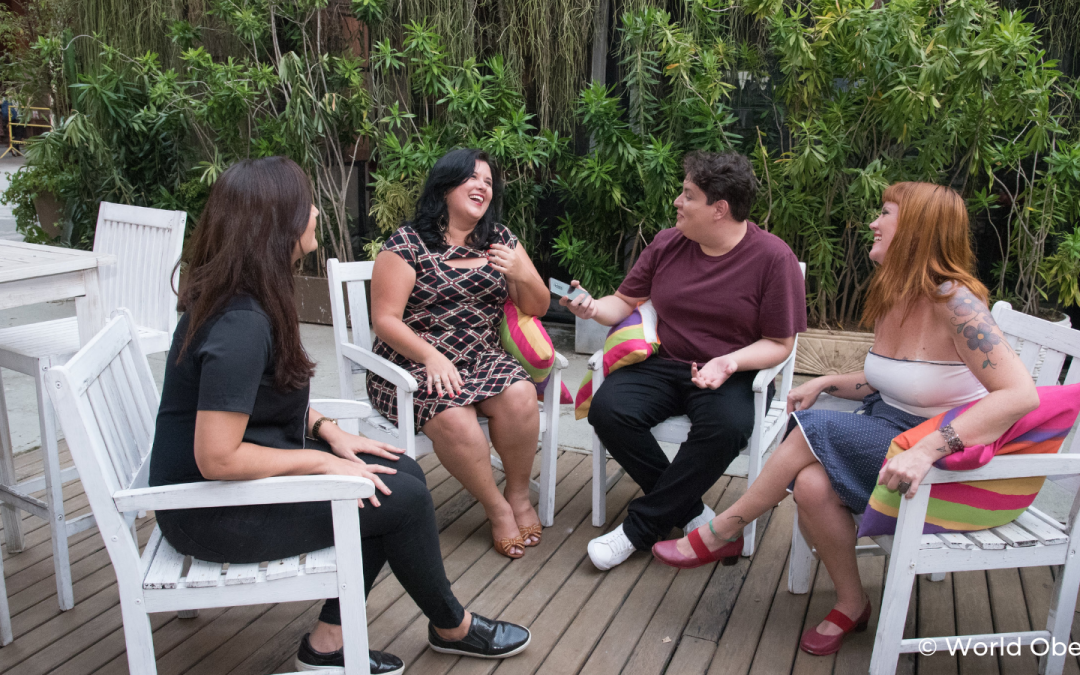 A staggering nine out of 10 people living with obesity say they’ve been stigmatised, criticised or abused because of their weight. But where is this behaviour coming from, how does it affect patients/clients and what can we do to stamp it out? With World Obesity Day on 4 March themed ‘Everybody needs to act’, Registered Dietitian Juliette Kellow investigates… We’d love to hear your thoughts and experiences: leave a comment in the box below.

Weight stigma, weight bias, weight discrimination! They’ve been experienced by many of our patients and clients for decades, but it’s only recently that steps have started to be taken to stamp them out. In the past few years, everyone from politicians and policy makers to health professionals and educators have started to recognise and understand the need to eliminate stigma and discrimination against people because of their weight.

While the terms weight bias, stigma and discrimination are often used interchangeably, they do have different meanings:

This bias, stigma and discrimination affects millions of people in many countries. It’s found across different ethnic, income and education groups, is experienced by men and women, and is seen in children, teenagers and adults. It can occur across the whole weight spectrum, including people who are underweight or with a normal weight, but it’s most commonly experienced by those with a higher weight.

The scale of the problem

With 64% of adults in England having a BMI over 25, many people face weight stigma. In a report from the All-Party Parliamentary Group on Obesity, 88% of people living with obesity said they’d been stigmatised because of their weight. Indeed, it’s now the biggest form of discrimination in the UK. In a poll conducted by the World Obesity Federation for World Obesity Day in 2018, 62% of Brits agreed someone who was overweight was likely to be discriminated against – higher than other forms of discrimination, including ethnicity (60%), sexual orientation (56%) and gender (40%).

Weight stigma is so deeply entrenched in our society it’s impossible to escape. Media is a big contributor, but it’s also seen in social situations, schools and colleges and in the workplace. In a study of more than 2,400 American women, 72% said they’d experienced weight stigma from family, 64% from classmates, 60% from friends, 54% from colleagues, 43% from employers, 32% from teachers and 23% from people in authority such as police.

Worryingly, stigmatising attitudes are also found extensively in healthcare settings – the very places where people living with obesity go to seek help. In the same study, doctors were the second most common source of weight stigma, with 69% of women saying they’d experienced this. Additionally, 46% reported weight stigma from nurses, 37% from dietitians and 21% from mental health professionals.

Meanwhile, even UK health policies and campaigns have been criticised for having stigmatising attitudes. It’s led to organisations such as the British Dietetic Association (BDA) requesting that weight stigma is avoided in any government communications and strategy focussed on obesity. 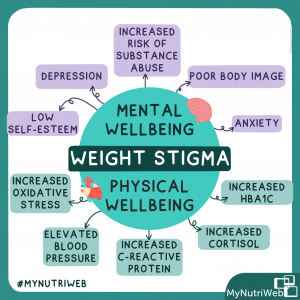 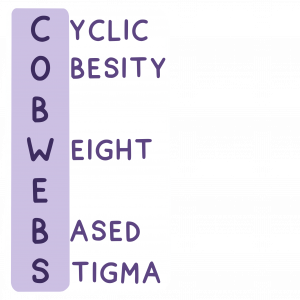 One theory suggests stress has a large part to play in this. The Cyclic Obesity Weight-Based Stigma or COBWEBS model, proposes that weight stigma leads to stress, which increases cortisol levels and eating, leading to weight gain and obesity. Indeed, one study found cortisol concentrations in hair – a marker of chronic stress – were 33% higher in those who’d experienced weight discrimination compared with those who’d not. Meanwhile, a recent meta-analysis of 54 studies found weight stigma increased the risk of unhealthy behaviours and decreased the risk of healthy ones.

In particular, weight stigma seems to affect eating habits and activity levels in a direction that results in weight gain rather than weight loss. One study found over a four-year period, there was an increase in weight and waist circumference in those who experienced weight stigma compared to those who didn’t. In addition, the chances of developing obesity increased more than 6-fold in those with a normal or overweight BMI at baseline but reported stigma.

It’s perhaps unsurprising as weight stigma has been linked to binge eating, disordered eating patterns, unhealthy weight control and increased calorie intakes. Eating is a common response to experiencing weight stigma, named by 79% of people with obesity in one study – exceeding the 63% of people who turned to dieting. In another study, women who perceived themselves to be overweight consumed more calories and felt less in control over eating when exposed to a weight stigmatising news story compared with a non-stigmatising story.  This wasn’t seen in women who didn’t perceive themselves to be overweight, indicating self-perceptions of body size, rather than actual body size may have a greater impact on responses to stigma.

Meanwhile, weight stigma has been linked to lower levels of activity. A study of adults aged 50 and over found perceived weight discrimination was linked to almost 60% higher odds of being inactive and 30% lower odds of taking part in moderate or vigorous activity at least once a week.

In short, weight stigma doesn’t encourage people to lose weight. Instead, it’s more likely to push people towards behaviours that promote weight gain and hinder weight loss. But this isn’t the only way weight stigma affects health. There’s now mounting evidence it affects the access to, and quality of, healthcare.

Although healthcare settings are meant to be a safe space where people can talk openly about their health and not feel judged, weight bias, stigma and discrimination is widespread. Negative attitudes and stereotypes towards people living with obesity have been documented amongst doctors, nurses, dietitians, psychologists, gynaecologists, professionals treating eating disorders, and even those dedicated to helping people living with obesity such as bariatric specialists.

Stereotypes that have been identified include views that patients with obesity are non-compliant, lazy, lacking in self-control, awkward, weak-willed, sloppy, unsuccessful, unintelligent and dishonest. This stigma also seems to be present before healthcare professionals even start working with patients – medical, dietetic, nursing and psychology students have all been shown to express bias. While some of this is explicit, much of the bias expressed by healthcare professionals towards patients with obesity is implicit. Both impact greatly on patients.

People living with obesity have reported feeling embarrassed and judged by healthcare providers because of their weight, are upset by comments made, feel there is a lack of empathy and respect, don’t feel they are taken seriously and say all their problems are blamed on their weight. In a UK report, only 26% of people said they’ve been treated with dignity and respect by healthcare professionals when seeking advice or treatment for obesity, while 42% didn’t feel comfortable talking to their GP about their weight.

Indeed, compared with people of a lower weight, healthcare providers have been found to spend less time in appointments, have less discussion, undertake fewer interventions and have less rapport with those of a heavier weight. There’s also the added embarrassment of being weighed, medical equipment being too small and insufficient comfortable seating in waiting or consultation rooms.

The outcome: patients have less trust in their healthcare providers, are less likely to stick with treatments, and are more likely to delay or avoid future appointments, examinations or screening for cancer or other illnesses. 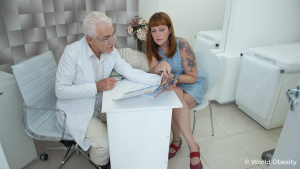 Thanks to growing research providing evidence that weight stigma worsens the health of people living with obesity, the topic is now receiving a much greater focus. Experts agree change is needed at every level, with government and policy makers ensuring stigmatising content in obesity strategies is avoided through to individuals addressing their own biases.

Progress is certainly being made. On a global level, in 2016 the World Health Organization (WHO) set out an agenda for zero discrimination in healthcare. This was followed by a document for the WHO European Region that identified how Member States could address weight bias and obesity stigma.

In 2018, World Obesity Day focussed on eliminating weight stigma and extended its range of resources.

In 2019, there was a new Lancet nutrition initiative with a call for papers to contribute to the evidence base needed to reduce and eradicate weight stigma.

Momentum gathered in 2020 with the publication of The Joint International Consensus Statement for Ending Stigma of Obesity. Co-authored by world experts, the document included recommendations and a pledge to eliminate weight stigma, which has been signed by more than 100 medical and scientific societies, including the BDA, Diabetes UK and Obesity UK. Also in 2020, Obesity Canada – a Canadian charity that focusses on obesity research, education and advocacy – launched Clinical Practice Guidelines, which included a chapter on reducing weight stigma.

Although there is still much to do, the last few years have seen many positive steps in the UK. Some examples including:

Dr Adrian Brown said: “At the moment, a person can be discriminated against in the workplace due to their weight with no legal protection. There are still a lot of unanswered questions around whether weight and body size should be a protected characteristic like age, gender, disability or ethnicity and whether legislative action is the way to go.

“Now we are aware of the impact of weight stigma on people’s health, we have to do something about it. We have to start changing the environment and challenge stigma when we see it, whether that’s the language used by colleagues or in journals or the media. It might mean we have to have difficult conversations with people but it’s important we do this.

“As Desmond Tutu said, ‘If you are neutral in situations of injustice, you have chosen the side of the oppressor’.”

Hala El-Shafie believes: “If we really want to reduce weight stigma, we need to stop commenting on other people’s weight altogether, including people who are very slim as well as those at the heavier end of the weight spectrum. It’s not unusual for very slim women to experience stigmatising language and comments, for example, suggesting they have an eating disorder, need to ‘fatten up’ or ‘could do with a good meal inside them’. This can be very harmful. Praising someone when they’ve lost weight is also inappropriate – that person might have lost weight following a bereavement or because they have an illness where weight loss is not something to celebrate.

“I’d like to see all healthcare settings have a zero-tolerance policy towards weight stigma and promote ‘weight stigma free environments’, like they do ‘smoke free zones’.”

Anne Wright says: “There remains an outdated perception that dietitians need to be a certain size to do their job – neither too heavy nor too slim. It’s time for attitudes to change. A dietitian’s size or weight has absolutely no impact on their professional competence or ability to do their job. Even if a dietitian loses or gains weight, they’ll still have the same brain, the same knowledge and the same dietetic experience as before. Changes in their weight won’t affect the way they perform their job. The only difference will be that other people’s attitudes towards them will change.”

How you can help eliminate weight stigma in healthcare settings?

Try these language swaps, too (click on the image to enlarge): 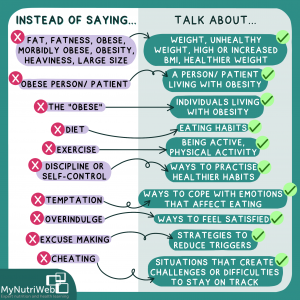 Anne Wright believes, “The move towards person-first language is a step in the right direction but we won’t get the narrative completely right until we lose all labels that mention weight or size. We just need to call our patient’s ‘people’, not ‘people living with obesity’. In my experience, most people know they’re overweight – they don’t need a label to tell them this.”

Make sure any leaflets or posters you use or produce avoid stigmatising language and images. This Food Active! resource will help you get it right. Plus, BDA members can access the BDA guidelines to ensure any content they create avoids stigmatising people living with obesity. To access these guidelines, BDA members need to login then search for ‘eliminating weight stigma’.

Recommendations when with clients