By Gracia Arulpragasam, Health Promotion Officer at the World Cancer Research Fund (WCRF), a Registered Associate Nutritionist (ANutr) with a background in public health nutrition and childhood obesity. At WCRF, Gracia works as a Health Promotion Officer developing health information in cancer prevention and cancer survivorship. She delivers a range of activities including workshops and eLearning courses, and develops resources for health professionals to raise awareness of cancer prevention and to support them in preventing cancer.

The associations between plant-based foods and cancer risk have been studied for many years. Bowel cancer, also known as colorectal cancer, is the fourth most common cancer in the UK. Annually, bowel cancer is a cause of approximately 694,000 deaths across the globe, with higher incidence reported in high-income countries. In in the UK, around 43,476 new bowel cancer cases were registered in 2017. This April is Bowel Cancer Awareness Month – an opportunity to raise awareness and importantly, to highlight that bowel cancer is one of the most preventable types of cancer. Nearly half of all cases of bowel cancer in the UK could be prevented every year by changes to diet and lifestyle. 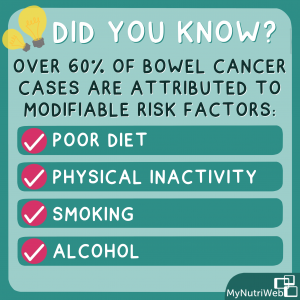 The bowel is part of our digestive system and it functions to digest and absorb nutrients and water from the food we consume. Bowel cancer occurs when cells in the bowel lining are damaged, leading to uncontrollable growth and formation of cancerous cells.

Bowel cancer is caused by more than one factor, with genetic and environmental aspects playing a role. Modifiable risk factors including poor diet, smoking, alcohol, and physical inactivity play an important role in the progression and occurrence of bowel cancer. Studies have highlighted that dietary factors contribute to nearly 50% of all bowel cancer cases, with only about 5-10% of cases being attributed to genetics. Research funded by  World Cancer Research Fund (WCRF) found that 67% and 60% of UK bowel cancer cases in men and women, respectively, were attributed to dietaryand lifestyle factors. These findings reinforce the importance of diet and lifestyle to help prevent bowel cancer.

So, what does the research say about bowel cancer prevention? 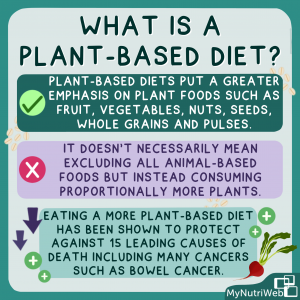 Eating more plant-based foods has been shown to protect against 15 leading causes of death, including many cancers such as bowel cancer. Plant-based dietary patterns place a greater emphasis on foods primarily from plants, such as fruit, vegetables, nuts, seeds, wholegrains, and pulses. A plant-based diet does not necessarily mean excluding all animal-based foods, but rather, consuming proportionately more foods from plant sources.

WCRF’s flagship international research programme, the Continuous Update Project (CUP), is the world’s largest, most authoritative and up-to-date source of scientific research on cancer prevention and survivorship through diet, nutrition, and physical activity. In the latest Third Expert Report, the CUP panel of experts concluded that there is strong evidence that consumption of red and processed meat increases the risk of bowel cancer (see Figure 1). There was also strong evidence that consumption of alcoholic drinks, as well as overweight and obesity, increases the risk of bowel cancer.

Red meat and cancer
Red and processed meat has received a great deal of scientific and public interest in relation to its association with bowel cancer. Red meat is defined as all types of muscle meat from a mammal, such as beef, veal, pork, lamb, mutton, horse, and goat. Processed meat refers to meat that has been transformed through salting, curing, smoking or other processes to enhance flavour of improve preservation. A recent study, part funded by World Cancer Research Fund, analysed the risk of bowel, prostate and breast cancer in participants with different dietary patterns. The findings showed that low meat-eaters (defined as those who reported consuming processed, red meat or poultry less than five times a week), had a 9% lower risk of developing bowel cancer in comparison with regular meat-eaters (who reported consuming meat products more than five times a week).

There are several underlying reasons to explain the link between red meat and cancer risk. Haem iron, which is present in high levels in red meat, has been shown to lead to the formation of n-nitroso compounds which can cause cancer. Cooking meats at high temperatures, prolonged exposure to heat and cooking by various types of grilling can result in the formation of cancer-causing compounds such as heterocyclic amines (HCA) and polycyclic aromatic hydrocarbons (PAH)  that have been linked to bowel cancer. With processed meat, the processes are similar, however the higher fat content and addition of preservatives, such as nitrates, can enhance the formation of cancer-causing compounds during the cooking process. Because of this strong evidence, our recommendation is to limit red and processed meat. More information on this can be found on WCRF colorectal cancer report. 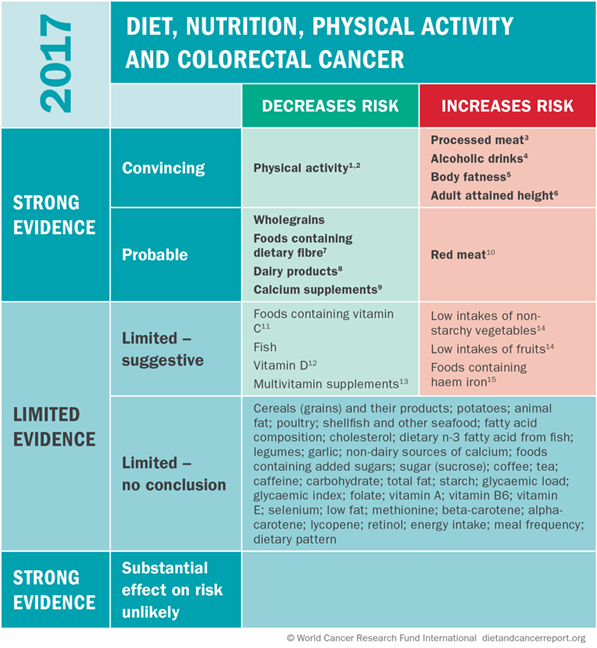 The CUP report also found some evidence that low intake of fruits and non-starchy vegetables was associated with an increased risk of bowel cancer. Consumption of fruits and vegetables provides several nutrients (such as vitamin C, folic acid, flavonoids and plant sterols) alongside having high fibre content which may all contribute to anti-cancer benefits. Dietary fibre may reduce bowel cancer through reducing intestinal time, synthesising short-chain fatty acids by the intestinal microbiota and increasing faecal bulk, which reduces the potential for faecal mutagens to interact with the colon mucosa.

So, can we say that a plant-based diet prevents bowel cancer?

As with most things with nutrition and health outcomes, the answer is often never black or white! However, what we do know is that there is an increasing body of evidence that shows eating more plant-based foods, limiting consumption of red and processed meat, keeping physically active, minimising alcohol intake and being a healthy weight provides the greatest protection against bowel cancer.

More resources for you

WCRF Protect yourself against bowel cancer leaflet – Handy leaflet with practical tips on how to reduce risk of developing bowel cancer. This leaflet also has guidance on the symptoms to look out for, plus information on screening. You can order free printed copies.