Getting Vegan Savvy for Veganuary 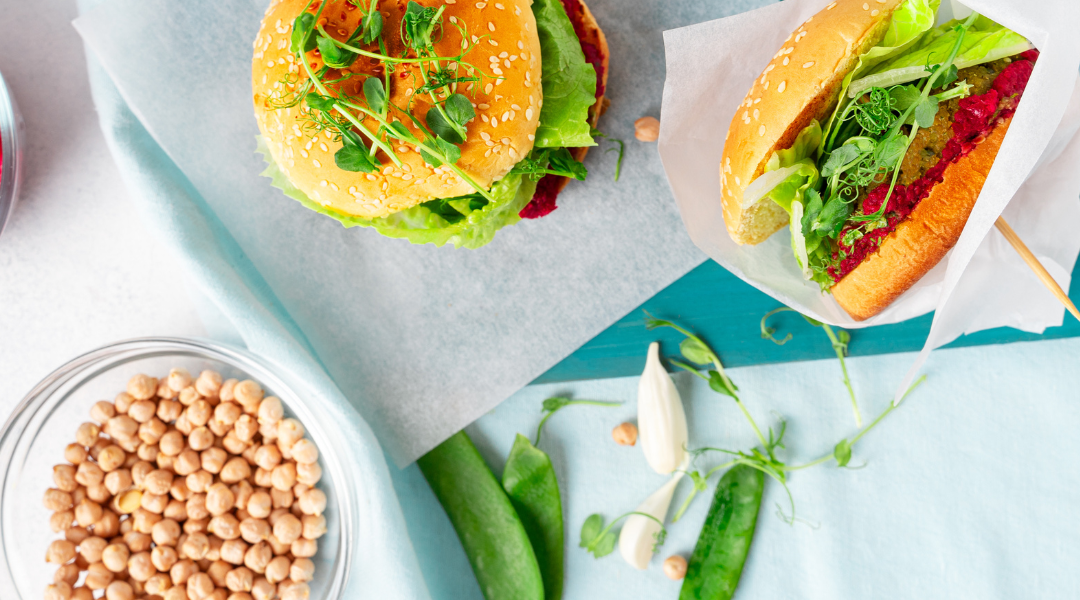 ‘Veganuary’ is upon us. It’s another record-breaking year for one of the largest vegan movements in the world, with over 440,000 people in the UK pledging to eat vegan this month.

It’s no wonder we’re seeing an increase: data from Google Trends show that the popularity of veganism is at an all-time high – twice as popular as it was just five years ago. Vegans and vegetarians are set to make up a quarter of the British population in 20251.

Whilst most of the population still consume animal products regularly, the move to a more plant-based diet should be celebrated: it’s beneficial for human health and the health of our planet.

However, we know that not all vegan diets are equally healthy, and veganism should not be seen a quick January fix.

Hundreds of new vegan products are being developed every year to meet the demands of the growing market. But as with other fast foods, they can be high in fat, salt, and sugars, and can be lacking in essential nutrients. Consuming these products regularly, paired with a lack of education of what constitutes a healthy vegan diet means those following a strict vegan diet also risk a deficit in some essential nutrients.

With the rise in veganism looking unlikely to slow down, it’s important that health professionals are prepared to support patients following a vegan diet.

So, what does the shift to ‘plant-based’ mean? And what do you need to be aware of to make sure that you’re giving the best nutritional advice to clients?

The term ‘plant-based’ has become a common buzzword in the health and nutrition space, but new research from the British Nutrition Foundation (BNF) reveals that many people are confused about what ‘plant-based’ actually means2.

Sara Stanner, the BNF’s Science Director, comments: “Research shows that diets that contain a high proportion of plant-based foods have health and environmental benefits. The key to a healthy plant-based diet is eating a wide variety of plant foods, but not necessarily cutting out animal products altogether.”

What are the most popular products?

In the new BNF survey, people were asked which plant-based foods they eat at least once a month; the most popular options were nuts (51%) and lentils, beans or chickpeas (50%). The results also show that more people in the younger age groups favour meat alternatives, such as Quorn products and meat-free burgers and sausages.

Over a quarter (26%) of all females and 17% of males in the survey say they regularly consume plant-based milk alternatives; again with 18 – 24-year-olds the most likely to use these products (33%). Shockingly, a quarter (25%) of all respondents do not eat any of the plant-based foods listed in the survey, such as pulses, nuts, meat-free mince or sausages, regularly.

Sara Stanner added: “It’s interesting but perhaps not surprising to see that younger adults appear to be choosing more plant-based products such as milk alternatives, plant-based yoghurts and plant-based ready meals than those aged 35 and over, as plant-based diets seem to particularly appeal to younger people.”

There is debate among health professionals about the nutritional adequacy of a vegan diet related to who is going vegan and how this is being achieved.

Every year, January is saturated with new diets and wellness trends. 38% of people who signed up for Veganuary in 2020 stated it was for health reasons3. There is a perceived health halo that comes with the term ‘plant-based’ or ‘vegan’, fuelled largely by vegan ‘detoxes’ endorsed by celebrity wellness gurus and fear-mongering documentaries such as ‘What the Health’ on Netflix.

Whilst there is no doubt that a shift to a more plant-based diet is beneficial for health, vegan diets and products are not all healthy.

The rise in veganism, vegetarianism and flexitarianism has resulted in a shift in consumer demand for more plant-based products, which the food industry has responded to. In the UK alone, hundreds of new plant-based products hit the shelves in January 2020, with even more products set to be launched in 2021, including Domino’s new Chick-Ain’t pizza and Krispy Kreme’s first ever vegan doughnut.

Although not all, many of these plant-based alternatives contain higher levels of salt, saturated fat and sugar than their animal-based counterparts. So, whilst traditionally a vegan diet could be a healthier option – featuring more vegetables, pulses and grains – the new availability of vegan alternatives to fast food adds another layer of complexity to achieving a healthy, vegan diet.

Sara Stanner says: “It’s great to see so much choice now available to consumers when it comes to plant-based products but, a note of caution, that ‘plant-based’ does not always guarantee ‘healthy’. When you’re shopping or choosing foods and drinks on the go, it’s always a good idea to check nutrition labels where possible and to go for those foods with less saturates, salt and sugar and to think about the balance of the diet overall.”

Azmina Govindji, dietitian at Azmina Nutrition and author of the new Vegan Savvy: The Expert’s Guide to Nutrition on a Plant-based Diet, points out that not all plant-based convenience foods should be demonised. “There is a valuable place for nutrient-dense vegan foods on the market. Fortified plant-based drinks, soya mince and mycoprotein (sold as Quorn), for example can be useful sources of nutrients such as high quality proteins and micronutrients. Comparing labels helps shoppers to be discerning and choose those with less saturated fat, sugar and salt.”

The health halo associated with vegan diets also fuels concerns from anti-diet professionals that Veganuary can be used as a cover for another restrictive January diet, with people potentially taking part because of the pressure to get ‘healthier’ or lose weight in the new year, and not really understanding how to optimise nutritional intake when restricting food groups as a newbie vegan.

Maeve Hannon, dietitian from Dietetically Speaking, says: “Although vegan diets can be healthy and balanced, one shouldn’t feel pressured to try a vegan diet if it feels too restrictive.

“For example: it can be harmful for those with a history of disordered eating to cut out entire food groups, depending on the individual person and their stage of recovery. You can also get a lot of the health and environmental benefits associated with a vegan diet by eating more plants and less animal-based foods, without going entirely vegan.

“So it’s important to consider the individual circumstances and also the person’s motivation for considering a vegan diet, so that we can support them in making dietary choices that are in their best interests.”

Nutritional considerations of a vegan diet

Whilst there are nutritional benefits to consuming animal products such as lean meats and dairy, there are environmental and health concerns about eating too much – and nearly all essential nutrients are found naturally in plant foods.

But healthy vegan diets do require more careful planning than an unrestricted diets and at least a basic level of understanding of nutrition, as some nutrients require special attention.

Nutrients that require specific attention in vegan diets include:

With an abundance of vegan convenience foods available, it can be easy for those trying a vegan diet for the first time to fall into the trap of relying on unfortified plant-based alternatives or unhealthy fast-food and end up missing out essential nutrients and a healthier plant-based diet.

If a patient or client wishes to switch to a vegan diet, it’s important for them to understand the potential deficits and some practical ways they can achieve a wide variety of nutrients – and even increase the bioavailability of key nutrients in their meals (the proportion of the nutrient that is digested, absorbed and metabolised).

This is where the concept of the ‘Nutrient Bridge’, developed by Azmina Govindji, comes in. She suggests that patients can bridge the nutritional gap and increase the bioavailability with a few simple pairings or meal additions. 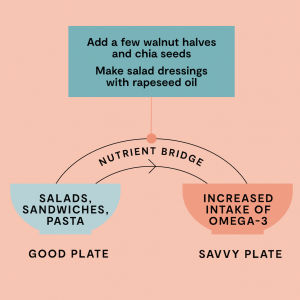 Azmina comments: “In my experience, many young people who decide to adopt a vegan diet simply consider swapping meat for vegan burgers and sausages without really understanding the need to make up for potential nutritional shortfalls.”

“We need much more accessible information to help guide people to make better choices. When my daughter announced she had become vegan in her early 20s, I remember feeling concerned about her intakes of nutrients such as calcium, iodine and omega three fatty acids. I was happy for her to take supplements of vitamin B12 and vitamin D, and I spent several years researching how best to achieve adequate intakes of other essential nutrients.

“I discovered that with careful planning it is indeed possible to bridge the nutrient gap and that was when I adopted the notion of the Nutrient Bridge”.

Nutrient Bridges can be easy tricks, such as stir-frying carrots instead of eating them raw, which helps the body to convert beta-carotene into vitamin A. Some bridges are swaps, others are small additions to meals and some double up as ways to add flavour. For example, a sprinkling of nutritional yeast is not only a great source of vitamin B12 but also adds a delicious ‘cheesy’ umami taste.

Tanya Haffner, dietitian and MyNutriWeb founder says: “With only 0.1% of the general population achieving the general healthy eating guidelines, where all food groups are included, it’s important for everyone where possible to become more conscious eaters. This includes vegans who are restricting animal based food groups.

“It doesn’t mean becoming obsessive or indeed it becoming laborious. To the contrary, with awareness and some smart, easy-to-achieve changes over time it can all become second nature and even fun getting more in touch with food sources and choices.

“In the meantime, it’s incumbent upon any food manufacturer, retailer or food service supplier of plant-based foods and meals to work with dietitians and registered nutritionists specialised in product and menu development to ensure that the nutrition is of a high standard. Unfortunately, many have bypassed this important step in the race to deliver on more plant-based food choices.”

As well as the nutritional aspects of vegan diets, we need to be aware of the wider aspects of veganism, so that we can support patients and clients to enjoy a lifestyle that fits with their beliefs and values, healthily.

To provide a true person-centred approach, it’s important that we understand the motivators behind a patient’s veganism so we can tailor advice in line with their ethics. Some vegans are motivated by environmental concerns, others by different ethical concerns. We need to be sensitive of these to ensure our recommendations are appropriate and helpful.

How to be vegan savvy: Answering your questions

Have you noticed an increase in clients wanting advice on vegan diets? Where do they struggle? What do you wish you knew more about? We’d love to hear your thoughts in the ‘comments’ section below.

We’ll be addressing the nutritional considerations for a vegan diet in detail with Azmina and Heather our upcoming webinar ‘How to be Vegan Savvy: A Practical Guide’ on 20 January 2021.

You can also catch up on our past webinars on plant-based eating for free:

Eating to improve gut health – do we need to eat 30 plant foods per week?

Dietetics in the Prison Environment

Key Resources – Why consider soy alternatives to dairy and meat