The African and Caribbean Eatwell Guide 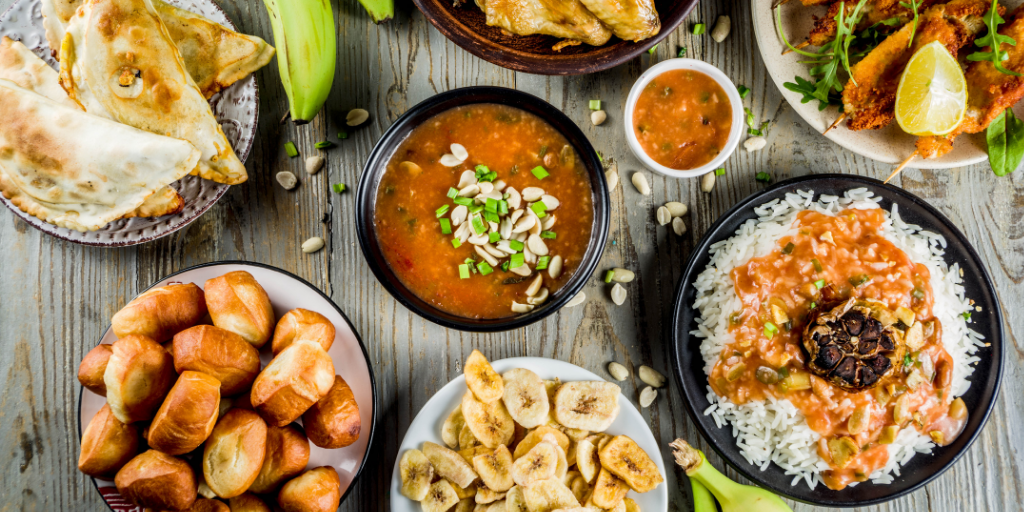 Guest author: Melissa Saint Hill, Registered Nutritionist (RNutr) & Clinical Project Manager. Melissa is a Clinical Project Manager in the pharmaceutical sector with a focus on patient engagement, recruitment and retention. She is also a co-founder of The Diverse Nutrition Association and a Registered Associate Nutritionist (ANutr) with a Masters in Nutritional Sciences and a Masters in Clinical Research of Human Nutrition. Melissa is passionate about working to support and educate healthcare professionals and members of the community with respect to culturally inclusive healthy diets.

THE AFRICAN AND CARIBBEAN EATWELL GUIDE

In contrast to other ethnicities in the UK, Black African and Caribbean populations are at a higher risk of experiencing hypertension, heart disease and stroke. Whilst further implementation of ethnic monitoring data is required to understand why these risks are heightened in Black African and Caribbean individuals in the UK, what we do know is that modifications to lifestyle may help to reduce risk. The Black UK population are encouraged to consume more fruits and vegetables, and work to reduce diets high in sugar, salt and fat, as well as increase physical activity.

Current visual healthy eating guidelines via the Eatwell Guide can be a good general starting point to somewhat give an overview to this advice. But how visually representative or helpful is it when taking a look at some of the frequently consumed foods of Black Africans and Caribbeans within the UK? Does the current Eatwell Guide cater to increased population diversity? Do the majority of people know where the wealth of foods consumed across these Black cultures fit into the current Eatwell Guide?

According to the 2011 Census records, the Black/African/Caribbean/Black British population comprises the second largest ethnic minority group within the UK, accounting for 3% of people within the UK, and 13.3% within London. As the population continues to become increasingly ethnically diverse, with people coming from a multitude of countries bringing their culture and customs with them, public health messages and resources must exist to resonate with a wider audience.

Countries that experience increased population diversity do not tend to have adequate access to services for certain ethnic groups, thus currently falling short where health equity is concerned. We need to ensure that health-related resources can be easily accessed, and that they are both culturally relevant and sensitive. In order for health messages to be effective, beliefs and attitudes need to be considered at a cultural level. People need to be able to see what they can identify with, at least in part, in order to improve behaviour and attitudes to healthy eating and lifestyle advice and make it work for them based on their cultural norms and identity, and their own individual local realities.

The Need for an African and Caribbean Guide

As associate registered/registered nutritionists, myself and my two co-founding colleagues at The Diverse Nutrition Association have all worked with UK African and Caribbean communities across our different specialisms; whether that be via 1-2-1 consultations or group workshops, church initiatives, schools, clinical research or public health intervention programmes. When using current healthy eating tools, the overarching theme communicated within the Black community was the assumption that because their foods were not shown in resources, that they must not be healthy or important. 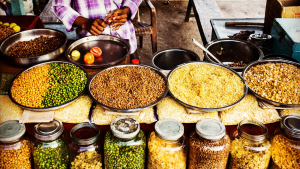 As with anything, it was therefore important to take our valuable insights of community feedback gained over the past few years and pair it with data and evidence before developing any resources. We felt that this would best illustrate what people felt and were saying, as we realised that our experiences within the community were not isolated to our own experiences.

During the last few months of 2020, we worked to develop an online survey which consisted of qualitative questions using Likert scales and qualitative questions that would allow people to really express their views in their own words. The survey was then distributed to networks of people within Black African and Communities across the UK. A total of 95 people aged 18 to 68 completed the survey, which allowed us to analyse how often cultural foods were consumed and exactly what popular foods were consumed amongst these responders.

The key findings from the survey matched people’s frustrations offline that we repeatedly heard throughout our own individual work-streams within the community. It was felt that there was indeed a lack of visual representation where UK nutrition and health resources were concerned, as expressed by 71.5% of responders. With that, we saw 66.6% of responders reporting that they consumed some of their cultural foods at least weekly, and a total of 95.8% of respondents reporting that they would find having an Eatwell Guide that had an overall focus on African and Caribbean foods to be useful with helping them make long term healthy dietary choices.

Some of the sentiments that people expressed were as follows:

“Healthcare professionals don’t tend to know much about African foods”

“Just because our food is cultural, doesn’t mean it isn’t healthy”

“If there were guidelines specific to different cultural foods, this would be beneficial” 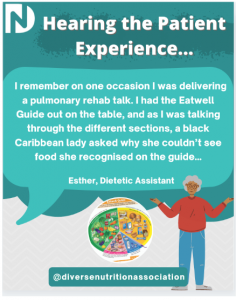 Fig 1: A quote from a member of the Caribbean community, serving as a typical example of what we heard as healthcare practitioners across Black African and Caribbean communities when showing tools and resources to aid with the encouragement of healthy eating communications.

To meet the needs evident in our research, we developed the bespoke African and Caribbean Eatwell Guide and made it available to download from the Diverse Nutrition Association Website 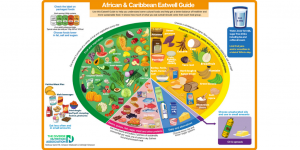 Culinary acculturation across both African and Caribbean communities to the UK diet across is evident; this was considered as our guide was being developed, which  is why we did not remove anything from the existing guide. The frequently reported foods from survey responders helped with shaping our content, as shown below: 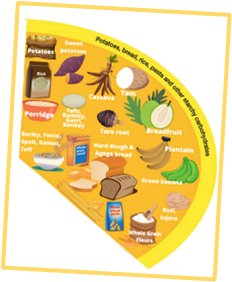 Cassava: Used to make popular Jamaican flatbreads such as bammy, or pounded to make west African dishes such as fufu, garri or kenkey

Yam: Pounded in West African cuisines, used in soups and stews. Can also be used to make fufu

Breadfruit: Often roasted and served with dishes such as ackee and saltfish. Savoury, although riper varieties have a subtle sweet taste

Plantain: Green plantains are starchy, whilst yellow plantains are sweeter. Frequently used in soups, stews, curries or as a standalone side dish. Used in a variety of ways across Caribbean and African cultures (e.g. tostones and tatales)

Green banana: Typically boiled and served with other sides such as yam. Can be used in soups or salads also

Hardo bread, roti, injera: Can all be requested as wholegrain versions in African/Caribbean ethnic supermarkets 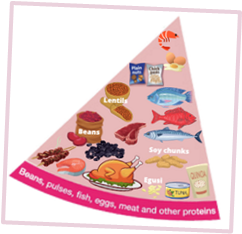 Lentils: Used in salads and stews

Chickpeas: Used in curries, stews, or to stuff flatbreads such as Trinidadian doubles

Soy chunks: Typically used in a lot of plant-based meals

Egusi: Melon seeds. Can be used in soups or stews

Beans: Kidney and black beans shown here but a variety of beans such as gungo peas, or black eye peas used in dishes such as rice and peas, Caribbean stews (stew peas) West African stews (red red or groundnut stew)

Coconut: Used in a variety of dishes from stews, breads (coco bread), curries

Jackfruit: Typically eaten just as a fruit, not used in cooking traditionally

Watermelon: Popular fruit across both cultures, especially with it growing in Jamaica and being available year-round

Ackee: Sold in tins in the UK – yellow fleshy fruit eaten. Used in many savoury dishes such as ackee and saltfish or in stew or curries

Soursop: Often made into beverages 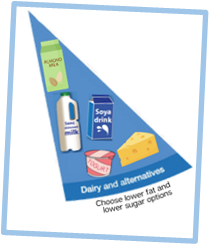 Malt beverages: Tend to be high in sugar 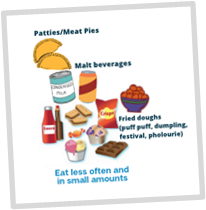 Fried doughs: Fried dumplings consumed as part of ‘fry-up’ breakfasts with ackee and saltfish, or as a side with dinner. Can be stuffed with meat or vegetables. Sweet and savoury versions

The African and Caribbean Eatwell Guide will support healthcare professions in learning about some popular foods that represent countries that shape African and Caribbean communities within the UK. The first thing is to remember that the food groups remain exactly the same. A carbohydrate is still a carbohydrate, a protein is still a protein and so on. Categorising the foods into groups takes on the same sentiment.

Even if you aren’t aware of some of the foods within the guide (and this is why we have labelled some of the more unfamiliar items), you can use the guide to encourage discussion. As we have seen within community engagement work, people will identify with some of the foods they eat here, and this will be more than enough to open up further discussion. You will see a transition from people not engaging very much to being much more conversational –  and during those fact finding moments, you will gain even more valuable information, which not only helps to increase your cultural humility and understanding of different cultures and behaviours that impact health, but you will become more comfortable and open.

Your patient or client will pick up on this and it tends to be very well received. The most important benefit is that they leave with realistic and appropriate measures and recommendations – likely leading to better health outcomes.  Of course, not all foods will be on here, but by using the guide, you will start to get a better understanding of different foods and where they may fit.

After successfully presenting our survey data and evidence to Public Health England in January 2021 and seeing a demand via download of our African and Caribbean Eatwell guide since October 2021, we encourage Public Health England to consider official publication of this very useful resource as it helps both healthcare practitioners and people with the community.

Let us know what you think of the blog and share your thoughts in the comments box below.